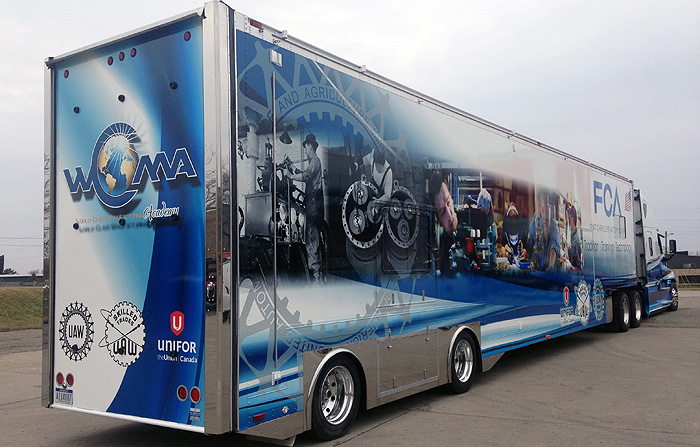 When the Chrysler Group was rebranded as FCA – Fiat Chrysler Automobiles last year, they wanted a semi truck wrap that could be used at NASCAR and other events throughout North America. Fortunately, Signs by Crannie was up to the challenge. In fact, this became the most extensive truck wrap in SBC history.

Beginning months in advance, FCA asked Signs by Crannie to design artwork to cover the tractor exterior, the trailer exterior, the trailer interior, and the trailer awning. At the rear of the trailer would be images of FCA factory workers on the line in sepia black & white tones. As the graphics progressed to the front of the tractor, they would become more colorful and the pictures more modern. The inside of the 53’ long trailer would need graphics on the ceiling and walls to look like you are inside a Chrysler factory.

Since the truck and trailer would be parked for exhibits, attention to detail was a must. For example, the graphics would need to be heat shrunk around every individual rivet. Clarity on these graphics was required for up-close observation. Since the trailer has several windows, we used perforated vinyl graphics to let in light while not impacting the overall design.

Once the graphics design was finalized, SBC produced the digital printing using 3M substrate printed in-house using our newest Roland VersaCamm 540 printer. The graphics were installed on 4 exterior sides of the trailer (including roof) and inside as well. The new tractor came to us white and we added the graphics over all the compound panels and curves as shown. The used trailer came to us painted red, so the graphics had to cover 100% of the exterior.

With our new facility, Signs by Crannie team was able to complete the entire semi truck and trailer wrap in a well-lit and heated environment. 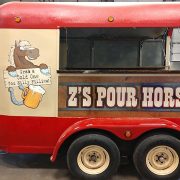 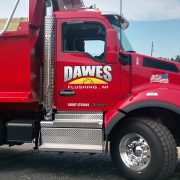 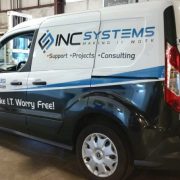